Northern Ireland was not a place that came up very often on my travel radar, but while doing some research on my last name and family genealogy, I came across some information on Ancestry.com that told me the Laird last name was,”Scottish and northern Irish: status name for a landlord, from northern Middle English “laverd.” This bit of information piqued my interest on the northern region of Ireland.

While traveling in Edinburgh I kept hearing from a few locals how “very Scottish” (or should I say “verra Scottish” fellow Outlander fans? 🙂 ) my name was.  Growing up, the popular family theory of our historic origins were from Scotland. So, when I found this info about Northern Ireland I kept on researching and found on this website : Laird Family Association  that Laird is “..the Scottish form of Lord which is also found in the northern counties of Ireland in considerable numbers…” “How is a Scottish name found in the Northern counties of Ireland,” I asked myself.  I consulted the ever reliable Wikipedia which said, “An estimated 100,000 Scottish Presbyterians moved to the northern counties of Ireland between 1607 and the Battle of the Boyne in 1690.” Ahhh, so they may have been sent by the king to colonize Ireland and spread some of that good old religion. Everyone loves the religions.

Well finding info off the internet is fun and all, but this was something I had to find out for myself so during my trip to Ireland this Summer, I decided to head up north from my base in Dublin and pay a visit to some potential ancestral homelands.

I’m not really sure why Northern Ireland was not popping up on my travel radar before this trip because this amazing place is seriously one of the most beautiful and awe-inspiring regions on Earth.

Is it the romantic castles, whimsical bridges, or majestic Dark Hedges that capture the imagination? 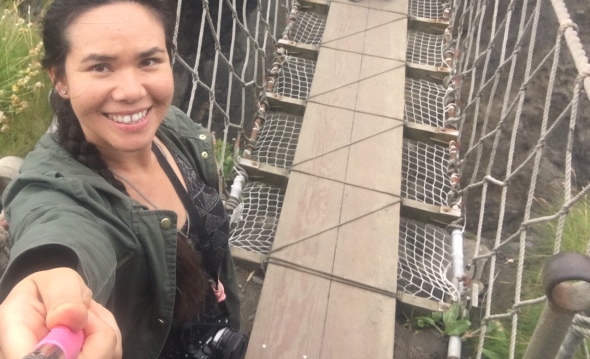 Is it the natural wonder known as the Giant’s Causeway that captures people’s imagination? Popular legend says it was once an ancient land bridge from Scotland to Ireland built by the mythical giant warrior Fionn mac Cumhaill.

Perhaps there’s just something about the scenic beauty, the fresh, dewey air, the crisp spray of the ocean, and the varied and deep history of the region that captures people’s hearts.

For me, it’s all that and maybe one day I will find out if it could be more.  So far , I have traced my branch of the Laird Family Tree all the way back to the 1700s prior to the Revolutionary war in the U.S. so my Laird ancestors have been in the States for a while. Perhaps any ties to the “Old Country” were forgotten long ago. I had a limited amount of time in Northern Ireland so I couldn’t dig as deep into research as I wanted to. However, I plan on returning one day. If not for research definitely just to visit this beautiful place again.

Researching my family tree is an ongoing project for me so hopefully with time I will be able to find the answers I am looking for. Are you interested in your family history? How far back can you trace your ancestry to? I encourage everyone to get into their family history. You never know what you will find, or where it may take you.

If you have any tips or questions about researching family history, tell me in the comments!

13 thoughts on “Family, are you in Northern Ireland?”